Startupbus from CPH to Paris 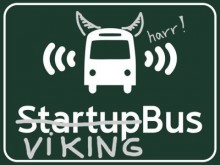 Recently the startup bus asked which other regions wanted to have their own startup bus. The Scandinavians spoke up the loudest. The result out of 14 other countries participating is a Scandinavian startup bus driving down from CPH to LeWeb ’12 in Paris on the 30st of November.

The startup bus concept began as a pub night promise in the U.S and soon became reality when 25 individuals, traveling for three days at 60 miles per hour drove from San Fransisco to Austin with the purpose of conveicing, building an launching a startup. The idea of venturing a unique business under resource and time constrains quickly spread in the U.S and came to Europe in December ’11.

The people participating in this years’ Vikings startup bus get the oppertunity to travel from Copenhagen to LeWeb ’12 in Paris. They are looking for hackathon extraordinaires with competences in development, design and marketing to create something unique. The Viking startupbus will meet up with the German startup bus in Cologne for a head on competition for the semi-finals of the startup competition in Paris.

Arriving in Paris the participants will attend the LeWeb ’12; the biggest internet conference in Europe. Here the startup competition will be hosted where participants can launch their company/products which have had less then €1.5M of investment. Here the most innovative and exiting startup will be announced.