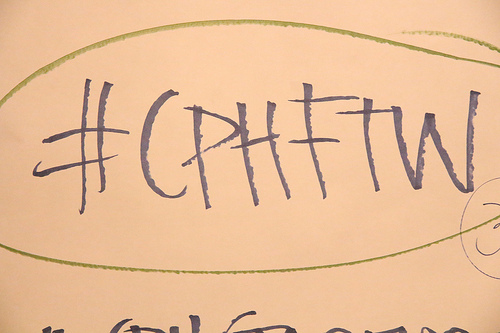 The meeting, initiated by ambitious people from the startup scene itself, had one mayor point – to create a common tag, a “flag”, that can be shared by anyone in the community.

This might seem easy, but when talking to participants in advance a lot of concern was raised – how can a meeting with so many strong and influential individuals be able to agree on anything? Apparently, they can manage that just fine.

The meeting, that really was a who-is-who of the Copenhagen startup scene, was started with everyone being able to come up with ideas and input. Ideas on how the community could be made better and stronger. A lot of smart people said a lot of smart things. Some points that where lifted by many where:

“Everyone has to feel they do what they do best, and not need to participate if they don’t want to. The best thing we can do for the community is to build kick-ass international startups” was voiced by business angel Klaus Nyengaard.

“There should be such a thing as Danish pride. We need to start promoting the ecosystem itself through interviews and word of mouth. There’s a lot to be proud about in these parts, we’re just not very skilled at telling the story.” said Conferize co-founder Martin Ferro-Thomsen

“We have to create a commons for the startup scene. A commons where we all contribute and share, a commons that nobody owns or rules but upon which we build our businesses and organizations. First Tuesday which I cofounded in Copenhagen almost 15 years ago, was a network owned by shareholders for profit. That was a mistake. #cphftw shall not repeat that mistake.” was voiced by Martin von Haller

Another great point was that there might be a need for some fixed meeting points, much like the St Oberholz café in Berlin. One or more cafés that people can have as their first-hand choice, where they have their meetings or as temporary workplaces. That way it is much easier for people to bump into each other and it openes up for daily interactions between entrepreneurs. An important point!

After sharing ideas about the community and improvements, the main task was laid out: to get everyone to agree on a hashtag! The facilitation was carried out professionally by Lærke Ullerup and after about almost half an hour, with participants brainstorming and voting on different ideas, the hashtag #cphftw was agreed upon. It was a definite winner, even if other great suggestions where thought up during the session as well.

“We need to have character. #cphftw has character, it has personality!” was Lars Buch from Startup Bootcamp heard saying before the final voting was held.

If FTW stands for “for the win”, “for the women” or even “for the weed” was up for anyones interpretation. But it was agreed that this hashtag could give the community the common platform that can help it improve – to spread information about startups, events and cool things to anyone, easily.

Some voices about the hashtag and from the community:

#cphftw – Copenhagen for the win/women/weed/ – weather – probably not, but new hashtag for startup community in cph

#cphftw pledge: invite everyone on the mailing list that @tahitahi is making for a Friday bar with unlimited free champagne at Rainmaking

Pledges from and to the community

At the end of the meeting multiple pledges where given from participants to the community. Amongst them was Daniel Laursen from Trendsonline who announced the next Tech BBQ, the Nordic Startup Conference was announced and also some cafés where being named for potential gathering points: Republikken offered first free coffee for anyone saying the magic words, and Theis Søndergaard from Vivino said they will hold upcoming meetings at Café Alma at Islands Brygge, and also try to arrange an discount there.

Also, a upcoming Town Hall meeting for february was announced, it will be held the 20th of february. More info about that will come later, but the next one will surely be way above 70 participants!

Overall, the atmosphere was great – there was a strong positive buzz in the entire place.

I, and I think everyone who was at that meeting, felt that the hashtag is a great keystone in building a better community. Everyone at that meeting does their own part to build the community, and by having a common platform new initiates can be picked up quicker, spread further and be improved faster. I myself got multiple ideas for what we could focus on more here at Øresund startups – such as opening for IT / developer jobs listing in order to attract international talents to startups.

This ‘town hall meeting’ was a grassroots movement at it’s finest, and we share those values and this is my personal opinion as well: a good community needs to be done by entrepreneurs, for entrepreneurs in order to be successful. That’s why I started this site in the first place, and I got the feeling today we are many doing our small parts, to create a great scene together!

What does this mean for the entire region? It is my believe that a strong Copenhagen will create a stronger region as well, also in Malmö, Helsingborg and the surroundings. I hope that the entire region will identify itself with Copenhagen and build upon it’s strength. Entrepreneurship and startups is about sharing, about building on each-others knowledge and networks. About making the world better one step at a time. By being open and promoting each other, we all win.

There are really many cool startups and cool entrepreneurs here – and we will do our best to lift up those that excel, in order to inspire but also enabling them to share their knowledge or contacts. Be it thru articles here, or thru making it possible for other entrepreneurs to know whom they can ask for advice.

Notes: Very sorry if anyone is misquoted – I did not take too careful notes, I was too much up in the moment. If anyone is angry complain to me, and I will do my best to correct it!

Also, pictures from the event can be found here and at Martin Le Blanc’s blog. You can also read more perspective on the evening at Neil Murray’s blog, as well as on Trendsonline.