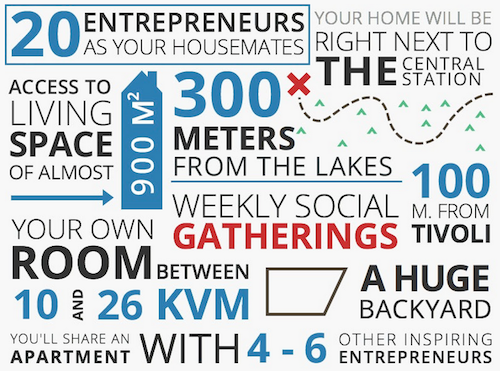 NEST Copenhagen, the rumored co-living space for entrepreneurs in Copenhagen, did officially announced yesterday that it will launch in April! It is currently accepting applications, which are open until 20th December.

The plans for NEST have been around for a while, but it has been problematic with getting the lease for a great enough space. But now Morten Krarup Kristensen, one of the key players behind the project, is satisfied:

“And with this building we also have the opportunity to expand further as well if the interest increases. I can’t wait to get started!”

Both Arctic Startup and Trendsonline have already reported on this, and the interest to be one of the 20 entrepreneurs that will be able to call NEST it’s home seems huge.

“In a year from now I’m confident NEST will be an integrated part of the Copenhagen startup environment. It will be a sanctuary where people from the whole environment can hang out with likeminded people.”

On the 1st of April 2014 NEST Copenhagen will open at Reventlowsgade 10.

NEST is inspired both by things like Hus24 in Stockholm, Sandcastle in Berlin and the famous Blackbox mansion in Silicon Valley. It will be very interesting to see what role it will play for the entrepreneurs living there, and we are confident it will be a great addition to the startup scene in this region!

If you want to be a part of it, apply here before the 20th of december. Both the Arctic Startup and the Trendsonline articles also contain a lot more details for anyone interested!