Ideon Science Park has got a new accelerator with focus on social entrepreneurship. To implement the project Lusic (Lund University Social Innovation Center) and LU Open were awarded SEK 300 000 (about 33 000 euro) from Tillväxtverket reports Sydsvenskan. “The Social Innovation Accelerator program” is a pilot version so far and will be launched in February. The program is open to any company that deals with solving of social issues. Application will be open at the beginning of the next year and by February five social entrepreneurs will begin a three-month long accelerator program.

According to Lewis Horne, Project Coordinator at Lusic and initiator of the accelerator, the region of Skåne has general perception that social innovation is about charity. But it is important for investors to see that there are business opportunities in social entrepreneurship as well.
Companies participating in the Accelerator program will benefit from the resources offered at Ideon.

“Ideon has been very supportive in terms of providing its business advisers. They also think it is good that we do not make a separate accelerator but e include it in the existing structure,” says Lewis Horne.

The Accelerator is similar to the concept of incubator but the program runs for a shorter period of time and is less limited to the physical location.

“It’s like an incubator but time is concentrated to three months instead of two years and content is more intense. The accelerator programs will also include milestones one must reach in order to continue and offer opportunities to travel together to meet potential investors. When the pilot experiment is finished and evaluated it, we will apply for more money to launch a major campaign in the fall or next year,” says Lewis Horne. 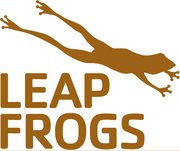 Leapfrogs for student business development is open for application