Engaging Care, formerly known as eDiabeat, is a technical platform that provides support to diabetic patients through an eight-week program. This will provide both the knowledge of the disease and give the person the motivation to change their lifestyle. Through the service, it is possible for the patient’s relatives to learn more about the disease and the caregivers to keep track of the patient.

Now, Engaging Care receives an investment from Peter Jungbeck, founder of the worldwide florist chain Euroflorist, and changes name from eDiabeat to Engaging Care in order to advance in additionally healthcare areas. The exact sum of the investment has not yet been announced, but Annica Carnbring Belfrage, Co-Founder and CEO of Engaging Care, reveals that the company will be valued to € 1.6 millions after the investment.

The money will be used to launch the finished product in Sweden in the early autumn. After that, the company will target to international markets. The prospective countries are not yet decided, but Annica Carnbring Belfrage says that the US and the Middle East are possible markets for the future. The products will also be developed to include additionally care areas.

”We will start with overweight, obesity and diabetes, but we predict a scalability of Engaging Care. In the future, the company can be extended to osteoarthritis and mental illness, or in fact wherever there is a need for more support and commitment among patients”, says Annica Carnbring Belfrage.

To start using Engaging Care’s platform, one has to fill out a form with basic questions about their health. Based on the answers, an eight-week program will be presented, which will provides both knowledge of the disease and give the person the motivation to change their lifestyle. Furthermore, caregivers can keep track of their patients and then adjust the individual care.

“We use a technology platform that has previously been used to create engagement and change behavior among employees at different companies”, says Annica Carnbring Belfrage. 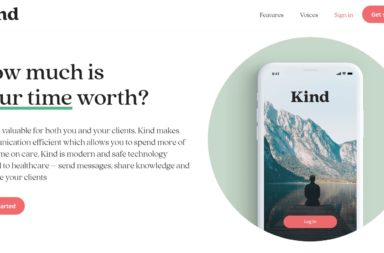 Venture Cup finals x 2 – a lot of winners from the region!