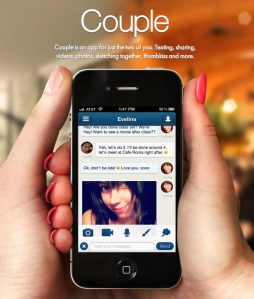 One of the upcoming trends in 2012 was private sharing, a social network for just two people. Many Apps for private sharing compete on the market these days. Cupple, one of FoundersHouse’s (CPH) companies, is one of those Apps which keeps ‘just the two of you’ connected. A short commercial video about Cupple/private sharing can be found here.

Cupple recently got acquired by Tenthbit, the developer of Pair, another private sharing App. The financial numbers of this acquisition are not disclosed, but we do know that Pair is big, they report 1.25M messages sent every day, 160m messages between couples to date and 800,000 downloads. The two Apps changed their name to Couple.

An interesting acquisition which might be the start of some turbulence in this market. Competition is fierce with other private sharing Apps like Between and Duet also being successful. This acquisition will make Pair a considerably larger player in the industry which might just be what Pair is after. The two have been in a lawsuit about trademark infringement last year. Thus Cupple’s IP and brand assets could well be a complimentary reason for acquiring the App.