Trendsonline has reported on the StartupNight#11 event with Martin Ferro-Thomsen from Conferize. Silicon Vikings presented, and the audience was treated to an hour of good advice from a very casual but well-prepared Martin Ferro-Thomsen, former co-founder of Issuu, now in the Danish startup Conferize. Conferize began in a basement with no windows at Old Mint in Copenhagen.

“People thought I rolled out from Issuu in a Ferrari, but most actually went to the team. I found a basement room at the Old Mint where I could create again. It only cost 500kr per month, there was no wifi or toilet – it was a real garage startup from the Old Mint.” – Martin Ferro-Thomsen

It was actually during Martin’s time as a humanist scholar at the University, which made him realize how many conferences there really are everywhere and all the time. He stood with an offer of an international 3-year PhD in one hand and funding for Issuu on the other hand, and although it was an interesting offer from KU, Martin had no doubt.

Today Conferize has about 20 employees who work together to facilitate digitization for those who do not yet understand how to tap into the possibilities (as Issuu did for offline stores). Conferize chooses the best content from different channels and gathers it all in a single feed, which can also be downloaded as a plugin for a conference’s own website. It’s not a small task, or a matter of scarcity. it’s a matter of abundance, and filtering

‘We are building a platform that is just as architecture and must carry as much data as facebook,’ explains Martin from Conferize.

Trendsonline podcast with Martin Ferro-Thomsen from 2012, goes back to asking where Conferize want to sit on this market. They can see that there are digital opportunities it – even if they do not know what exactly they are even (listen here – in Danish).

Again pulls Martin on the academic background and talk about network theory from ancient Greece as what he calls ‘old school’ today , which is the top-down form we know today (where there’s an event planner that controls the conference), toward the more loosely event based ‘next school’, where the conference is more reminiscent of a community meeting .

‘We will be the leading media for this community-based kind of conference.’ – says Martin to Trendsonline

After his presentation Martin explained that it is precisely humanists who are often adept at pattern recognition – what helps him to see trends. Examples of this new conference in which Conferize want to back up, the Finnish tech conference Slush, or un-conferences like the Geek Girl network used. This loose form will allow more space for what Martin believes has a much higher value than a retweet or a new LinkedIn contact.

‘Knowledge may be secondary to the conference, it’s about networking with the other while you are physically present in the environment such as those here,” he says

When you create a conference with open forums, people go in and out depending on the topic and the speaker of interest to them , so it creates some new dynamics. The distinction between participant and talk less, and several speakers therefore means more participants taking ownership. The speaker has value also in marketing the conference. 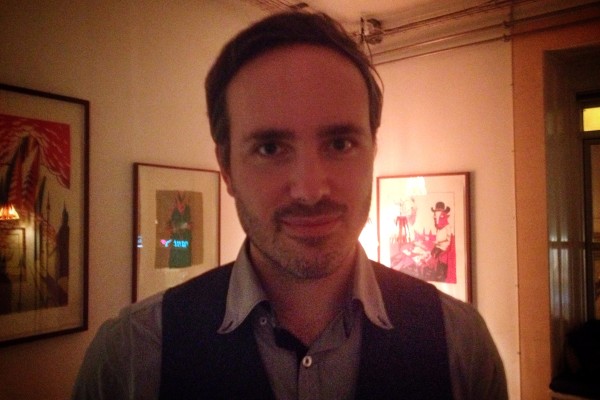 Advice.
Both through his presentations and in the eager Q&A afterwards, lots of good advice on founder teams, growth hacking and criteria for success and marketing were given. There were shared widely out of Martins experience and even if you were not among the 50-60 participants, you can get some of his advice here.

On founder teams?
“I do not believe in a one man show ,” was the first answer, which was supported by the evidence showing that the success rate is higher with 2-3 people in founder teams. In addition,

“Diversity beats complexity. It is important that you find people who can do what you can not.

Ideas.
Ideas are worthless without action, there’s no need not protect the idea (unless you have invented a formula for biofuels). He said with a laugh, that they’d been almost paranoid in Issuu ‘s founder team, they even got the postman to sign a confidentiality agreement.

“Ideas are like knowledge, if you give it away, you get more back!”

He says when you share ideas with the network, it simultaneous plants some seeds, some seeds and the network can get into and work with. People want to help.

In the end, he says, in fact he cannot help you because the ultimate experience is to do it yourself when you start a business.

“Build your own dream, otherwise you will be employed to build someone else’s dream.”

Funding Rule # 1: Do not do it.
Keep your regular work as long as you can and think carefully about which investor you enter are in cooperation with. Investors and VCs have clear visions, and startups failures often come down to the wrong investor being involved. Select the right people and remember that investors are also human beings with their own goals.

Often we see that investors want results. This means that you first get money when you have reached the next milestone – if not, it’s unplugged. About Bootstrapping Martin says:

“You will want to save on money, but you have to increase metabolism and get more people – depending on the startup you are.”

Martin has spoken with over 100 investors the last few years, but recommend others not to waste time with it. It has taught him lessons as “Do not talk to a VC if you do not have the traction” and that there is a kind of Super Angel to listen to and trust your gut feeling.

Denmark vs . U.S.
Conferize has most of its 20 employees in Denmark and received its funding in Denmark.

It was easier here in Denmark where I have my network and can be present.

For practical and personal reasons, Martin to choose Denmark.

“I thought it was easier to build startup in the U.S., but it was actually good in DK. It’s easier and better to hire people here at home.” … and Copenhagen – it is the most livable city in the world.”

He talks about how it is possible to start a business in Denmark and that the Danes are good at innovation, marketing and design. On the other hand, he believes that we can improve capital metrics of particular pre-seed stages, and it would be good to see the government focus more of this.

“We can do this!….. We have many startups and very talented people. We just want people to get out of their comfort zones and out of corporate positions.”

Thanks to Martin Ferro-Thomsen and Trendsonline for the story and the tips!