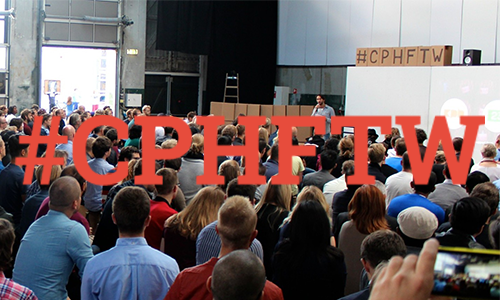 Copenhagen For The Win or CPHFTW was established in 2013 when three prominent entrepreneurs saw the need for a better and more connected startup community. The three founders, Thomas Madsen-Mygdal, Michael Reibel Boesen, and Sebastian Schwemer all shared a discontent with how startups were interacting in Copenhagen.

“We wasn’t satisfied with the situation as it was at the time. We were convinced that Copenhagen could do better than a lot of other big cities,” says Thomas Madsen-Mygdal in an interview with Børsen.

Tuesday the 17th of December the three founders met with 62 other like-minded entrepreneurs to discuss the future of the ecosystem. The location was Digterkroen in central Copenhagen which was owned by Martin von Haller Grønbæk, another prominent figure in the Danish startup community. All participants were frustrated about how hard it was for entrepreneurs to share resources and knowledge.

“New start-ups didn’t know where to go to gain a network or to find talented employees. We saw the situation as a burning platform and it wouldn’t help to wait around for something to happen. So we decided to do it ourselves,” says Thomas Madsen-Mygdal

A Gathering Point for Entrepreneurs

It was here that the foundation for CPHFTW was established and it was here it got its peculiar name. The first initiative from the organization was the Townhall event which is currently nearing its 11th edition. The event is meant as a gathering point where everyone from the community can meet, network and share experiences. It has acquired its own aesthetics often held in the minimalistic setting of abandoned storage facilities.

Today the 130 member companies range from big established companies such as Zendesk to small companies of only a few people. The aim is to reach 200 members before the end of 2017. Apart from the Townhall events, which are supported by the Danish Business Authority, all expenses of CPHFTW are funded by its members.

“Governments around the world are spending money to futher local entrepreneurship, but we have done it as a private and communial initiative. We do it wit transparancy and in a community that everyone can be a part of. It is this energy that we will have to redefine and it will be the next project of CPHFTW,” says Thomas Madsen-Mygdal

Read the complete article at Børsen.