This is an event report by Michael Reibel Boesen, who besides being founder and CTO at the very interesting startup Biomicore was also involved in organising the Betapitch event.

“Copenhagen is the most exciting startup city in the Nordics!”

Those were the words blurted out with passion from Martin Hauge, General Partner at Creandum during the White Bull panel session facilitated by Farley Duvall and Martin von Haller Grønbæk at Betapitch Copenhagen last night. What followed was an intense debate about how to create the next billion $/€ company in Copenhagen. Martin von Haller Grønbæk, Partner at Bird&Bird led on with asking about if tax was an inhibitor or could be a catalyst to get more of these companies. The panelists disagreed – almost to the point of starting a fistfight – whether our high taxes is indeed a problem or not. I believe all could agree that lower taxes will be beneficial but whether or not more billion $/€ companies will come by doing so remained highly debated. 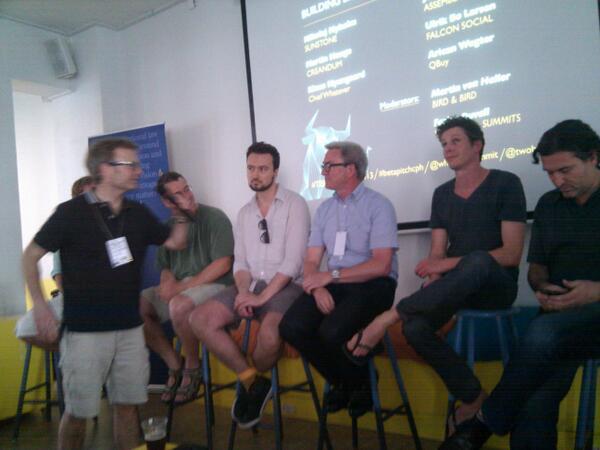 Just about 90 people showed up for the combined Betapitch and White Bull event. The participants came from all parts of the entrepreneurial stack: Wanna-be-preneurs, entrepreneurs, serial entrepreneurs, business angels, investors etc. It was an explosive and highly flammable mix of most of the startup scene in Denmark as well as the southern part of Sweden. Despite the buzzing, energized and hot (in multiple ways) atmosphere with multiple sparks flying around it was amazing that the whole of Republikken didn’t burn down to the ground. A key to why this didn’t happen was the continuous stream of beer, wine and food generously sponsored by Bird&Bird which added a certain level of humidity to the atmosphere. Suffice to say, we wouldn’t be shocked if several new knots were tied at the event. 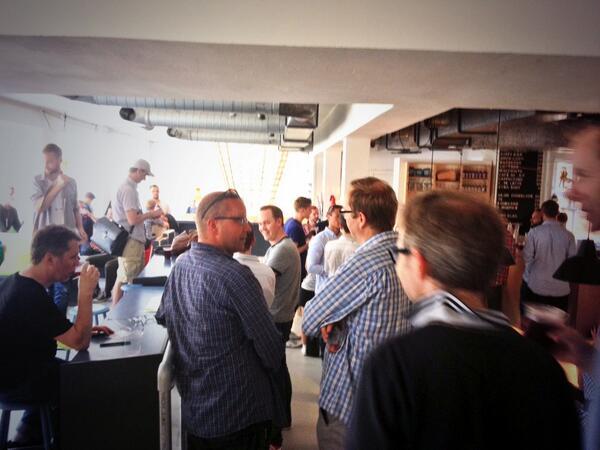 Wat’a-bike, boligportalen on steroids and just print your own damn house!

The ten teams that made it through were these:

On the paper it looked easy: Clearly all 10 ideas were awesome, but on the paper it would appear that some of them had greater potential, some teams looked nicer and some just seem to make more sense. But oh boy, were we wrong about that! Once the pitching war started it spared no one. First up, Swipes – amazing growth for an app that has only lived for a week in a very crowded space. Second up Wilding – an ambitious project that aims to create room-in-a-room for which to connect with loved ones, create amazing green-screen videos etc. Third, Bikway – a bike-path to be easily installed everywhere in order to move the Copenhagen bike experience to towns less fortunate. Fourth up iRezQ – a great team with an app that detects accidents alerts the authorities and nearby motorists. Fifth BillyTracker – track your kid using an easy-to-use app and a small GPS sensor. Sixth up Hiveeo – as Casper Overgaard tweeted “Boligportalen.dk on steroids”. Sean the founder came extremely well prepared with multiple backup slides and jokes – he made jury-members laugh so hard they seemed to forget their questions. Interesting strategy… Seventh Sociotransit – a website which let’s you crowdsource a courier from around the world to pickup forgotten cellphones, Chardonnay’s etc. Eighth up Jakob Bue – with an amazing tale of how and why we should use more waterbikes in cities with canals. The design he proposed is way better than what exists in the market today. Ninth – Tasspass – a website that crowdsources dogsitters tailored to the individual dogs needs. Finally, Kombo – a software tool that makes lives simpler for architects and will basically allow you to 3D print your own house.

The fight was on! Who would win the Trophy? After almost 40 minutes the jury emerged from the meeting room in a fog of white smoke. Ready to announce the winners. 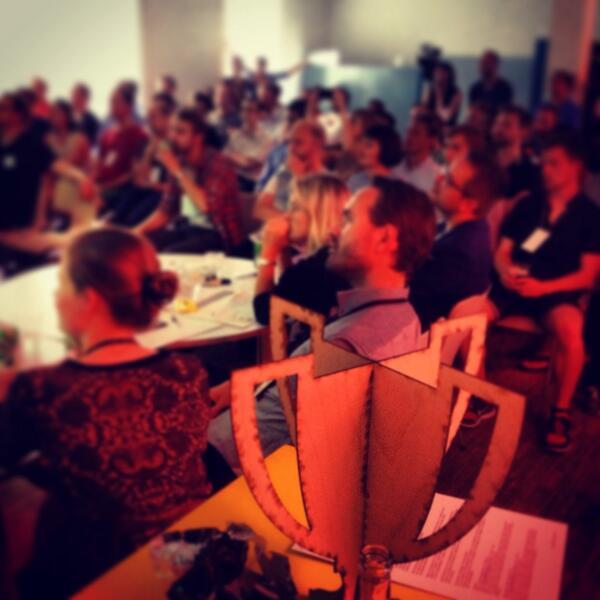 Bikway and Swipes took it all!

The 2nd place (which also qualifies for a trip to compete in Betapitch Global) was Swipes by Kasper Tornøe and Yana Vlatchkova – see you guys in Berlin!

But the 1st place went to Bikway by Andreas Schuster, Dovydas Rusciauskas, Eimantas Liudvinovicious and Simon Hansen! The jury found that the Bikway team had found a way to export something, which truly reflect Copenhagen and had done so in a very promising and believable way.

A small but important announcement was also made during Betapitch Copenhagen. Republikken which hosted the event – currently a co-working space, which is known for it’s focus on architects and designers have decided to take a firm step towards tech startups. At Betapitch Morten Sylvest Nøhr announced that they will blow the roof off the old Republikken and open the 4th floor of the building to house tech startups: So far titled RepublikkenTech. They’re doing so in collaboration with Michael Reibel Boesen, Sebastian Schwemer and Andreas Cleve Lohmann who are working on a project to empower the Copenhagen Tech Startup ecosystem so far named CphQ. If you’re interested in being a part of the new Tech Startup epicenter of Copenhagen, be the first to get an office etc. then sign-up for more information here: http://republikkenmeetstech.launchrock.com. Also like the Facebook page and follow the Twitter profile.

An amazing night in the spirit of innovation and ideas

All in all it was an amazing night with lightning talks by the likes of Tommy Ahlers and Thomas Madsen-Mygdal followed by the heated discussion of the White Bull panel before finally, going into the Betapitch competition, which featured teams that really showed how to step up to the challenge of pitching ideas. We want to thank all our sponsors and partners as well as the jury members: Thomas Madsen-Mygdal, Madeleine Gummer von Mohl, Martin Ferro-Thomsen, Henriette Weber and Anette Nørgaard! Thanks to all for making it an awesome night!

Check out the live feed at our Conferize site http://www.conferize.com/conferences/betapitch-copenhagen, which is also embeded in this post. There you can see the action step by step from last night. 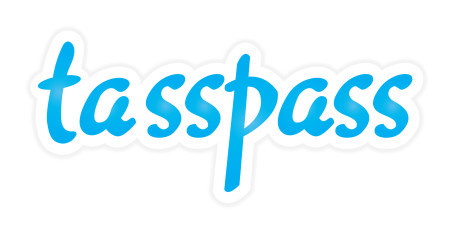 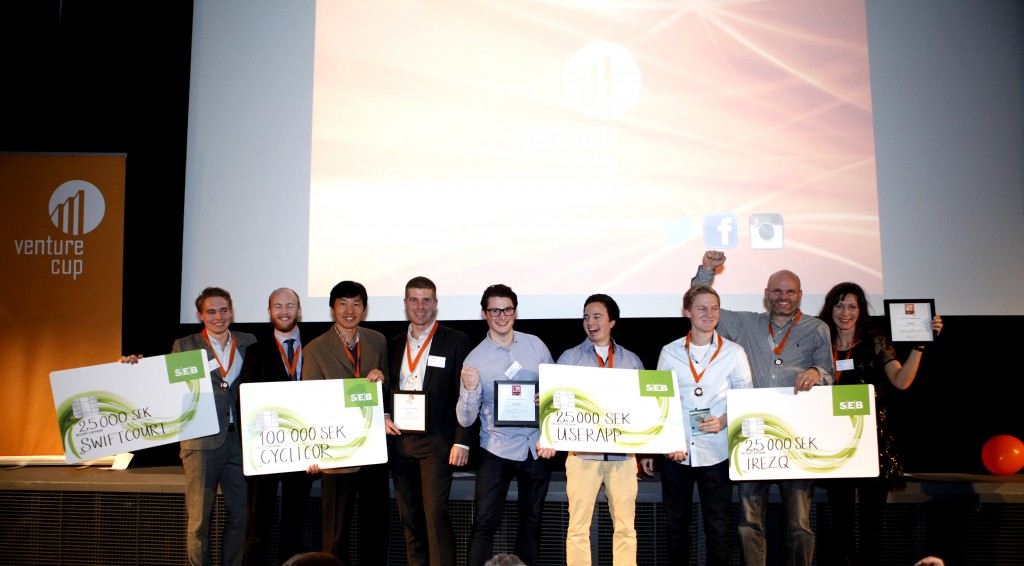 Seed funding and Jimmy Lundström on board with Tasspass

New startups in our listings