The Malmö-based company Earin, which develops and produces cordless headphones, has quietly been backed by SEK 25 million (ca. € 2 600, 000) in 2015 by Örjan Johansson‘s investment company Bluewise Fund.

Last January, media wrote about Earin, which received SEK 30 million (ca. € 3 150 000) as venture capital from other companies, like LMK Forward and the businessman Mohammed Al-Amoudi’s investment company Midroc. However, it was not declared that that Earin had already received SEK 25 million as a convertible loan from Örjan Johansson’s BlueWise Fund at the end of 2015.

Earin released the first version of its cordless headphones during the fall 2015. Recently, it launched an updated version of its products. The new model includes microphone with various touch features, including receiving calls, voice control, and software that removes disturbing sounds in the surroundings. It will be released soon and will continue to be produced in China.

We believe that we will sell everything we produce and will have the same pressure in sales, as experienced when we released the first model. But I do not think that we reach the planned figures this year, as product development has been ongoing through the whole year. Sales will probably rise again in 2018,“says co-founder Per Sennström to Rapidus.

Earin was founded by Per Sennström, jointly with Olle Lindén and Kiril Trajkovski. Revenues reached SEK 67 million in 2016. Earin currently stations 17 employees. The bulk of employees work in Malmö, where development operations are carried out. Besides, three employees are stationed in Hong Kong and one in USA. 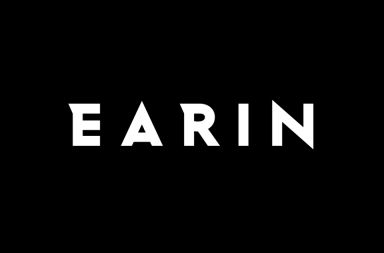