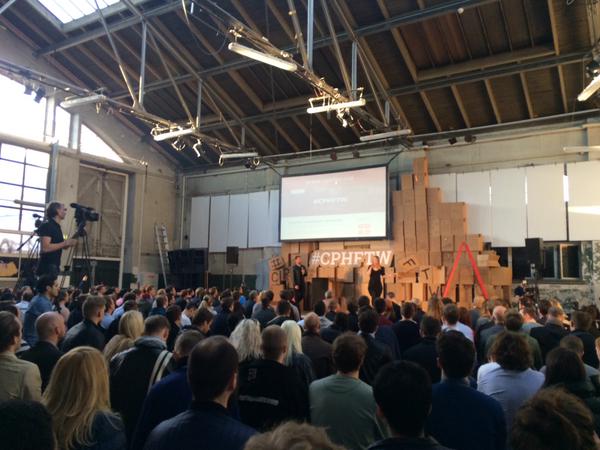 The fifth Town Hall meet up has been organised by the #cphftw initiative. This time it was held at the KPH Volume hall, with over 600 people attending.

The Town Halls – a grassroots movement

As with all other things #chpftw does, it is a ‘by startups, for startups’ initiative, made possible by the foundation that so far over 90 startups have supported. It is impressive how much that is achieved drawing on connections, contacts and volunteers. Not just the Town Halls, but also the VC arrangements, events like AngelNext, and the sharing groups.

As usually, it was an event packed with startup people, both senior entrepreneurs, engineers, angels and VCs, as well as those just exploring ideas. A mixture that enables a lot of knowledge to be shared.

New for this Town Hall was that there was a startup corner, with 6 booths. Exhibiting there were Audiocase, Mono+, Airhelp, Davuud, Usertribe and the Seedcamp Accelerator.

Also new was a job board, where anybody could post a job offer or request, using the analog methods of pen and papper.

The first keynote was by Morten Primdahl, Co-Founder and CTO of Zendesk. He shared a lot of insights into building a tech organisation and developer teams that scale globally, with offices in San Francisco as well as the Copenhagen, Melbourne and Singapore.

“We have built autonomous teams, working after their own goals and objectives”

He also talked about differences with hiring developers in SF compared to Copenhagen:

– was his remark on the SF scene, continuing:

“In Denmark people actually apply if you but out a job, you don’t have to chase them down.”

He also shared insights into how Zendesk was started and grew. He talked about the milestone, and technical problems, they got from getting Twitter as an early costumer in 2009. And about funding, and how it was impossible to raise money in Denmark back then.

“Funding in Denmark was very dry. For a long time our live was about to get by as good as possible with what we had.”

After Mortens talk, 5 startups got 5 minutes each on stage. These were:

Tonsser – A social network for football, especially youth clubs, founded in 2014. Peter took the stage and talked about how they have grown to over 10 000 users, with a 10-20 % average weekly user growth, and a great 50 % active weekly users. He also mentioned that they already cover 90 % of all Danish football teams for 14 – 19 year olds, and that the next step is internationalisation.

Coinify – talked about bitcoin and how Coinify handles bitcoin transaction and exchanges. They announced they had just closed a new deal with a credit card service provider, to be able to provide bitcoin services. And also that the team has been expanded to 15 people at the startup now.

Nordic Power Converters – A startup that just won the Danish Tech Challenge, with it’s technology that enables a large improvement in power converters. They are focusing on the LED market, and can make LED lamps lighter, cheaper, and increase their lifetime. A great innovation, with a huge market, that can save both a lot of costs as well as energy. They announced they are currently 15 at the startup, and are looking for raising a $ 2 millions round.

Be My Eyes – The app that helps blind people see and has gotten a huge deal of media attention. Christian Erfurt talked about how they have grown to 200 000 users in 50+ countries. That they got so much media attention that they have held over 100 different interviews since launch, and the plans for the future.

Future Electric – Probably the talk that left the biggest impression. Jesper Vind talked about his startup, which aims to be the Tesla of motorcycles! He talked about his racing background, and the huge advantages electric motorcycles had over regular ones when it comes to torque, speed and handling. He said they have created a motorcycle without liquids or vibrations, with a top speed over 300 km/h and insane acceleration. He also announced that they had just secured and angel round, with one of the Podio co-founders investing in the company!

The best impression was of course the live demo of the motorcycle that they had brought to the stage. By far the most popular object for pictures during the evening.

After the startup presentations, and some beer (with Zendesk’s employees handling the bar), 5 community initiatives from the region where presented as well. This included Creative Morning, Mindpark (transparency – I, Karsten Deppert, am the owner of Mindpark), Thinkubator and Design Thinking Copenhagen. All gave short presentations on how they are relevant or of use for the startup scene.
The Nordic Next event was also presented, by Michael Hoy. As the Nordic Next is an invite only event for investors, he gave it an appropriate introduction:

Michaels remarks that the event will be held in ‘Malmö, the Brooklyn of Copenhagen’ also drew a lot of cheers.

Final keynote was Jens Karstoft, who talked about his journey with Zmags, and about starting a venture and making an exit.

He shared 3 main lessons learned: How to become a market leading solution, how to get into the U.S. and how to exit the business. About how the grew and expanded to the U.S., he mentioned that it was not as hard as they believed:

“We did it before we raised any money.”

Other insights to building a great SaaS startup was to

“A relentless focus on execution”

He ended his talks with insights from being acquired, and how there is a big difference if you make an exit to a private equity company or to one of the tech giants, such as Facebook or Google.

Overall, it was another great Town Hall meet-up. We look forward to the next one already, planned to be in June! 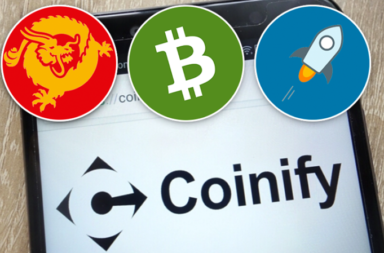 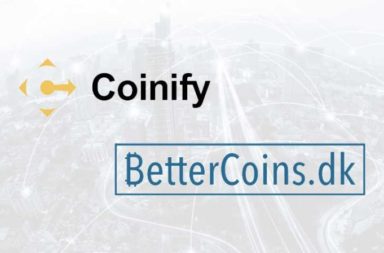 A 19-year-old sells cryptocurrency to Coinify

Coinify strengthens its European presence with a new acquisition