Incentive announces new round of funding - and hints at IPO plans this summer!

The social intranet startup Incentive announced that they will open for a new round of funding, to a total of no more then € 1.1M (10M SEK). A third of the amount is already signed, the rest is just made available, at a € 6.7M pre-money valuation.

“In November we got Semmy Rülf as the Chairman of Incentive and just recently we have also been joined by Martin Walfisz, which we are very proud of. The plan is that we will open for a listing of the company this summer already.” says Rickard Hansson, CEO at Incentive.

The IPO that is hinted at will probably be on the NASDAQ OMX First North exchange, but exact details are unknown.

Incentive is currently aiming primarily at the U.S. market for social intranets and will make major investments in the United States. In a recent session at the StartupDojo event Richard shared a lot of his experiences from building the U.S. part of the business.

Incentive develops software that allows companies and organizations to create their own social intranet, a type of collaboration platform that allows organizations to work smarter and spend less time searching for information. The idea is that all knowledge, both formal and informal, will end up in the same searchable structure.

One of the key points in regards to competing software is that the incentive can be installed on its own servers behind the firewall, which is appreciated by a large percentage of U.S. companies – especially after last year’s PRISM and wikileaks scandal.

In early March they released Incentive 3, a brand new version that focuses more on working smarter and protection of business critical data. 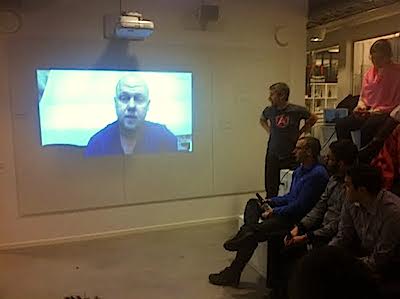