We have recently written about Ulobby, a Copenhagen-based startup, whose purpose is to digitalise and democratise the lobbying industry.

The startup was founded in 2017 and it is available in Denmark and Belgium. Now the startup has expanded further internationally and we have reached to Ulobby‘s cofounder and CEO Anders Kopp Jensen for an interview. Read more about what Ulobby has been up to below.

Hello Anders! Welcome back to Øresund Startup News. Tell us briefly, what has been going on with Ulobby since our previous feature?

For the last couple of months two especially big things have been in focus: The first is recruiting and onboarding new colleagues to keep up with the many new clients coming in. On average we have experienced a revenue growth of +10% month-by-month since June, so this means that all our processes also need to be structured for scaling so fast. We want to make sure all our users get a great experience when they use our platform to handle their political issues.

The second big thing in focus for us is funding, as we are preparing to raise a new round in March for further expansion.

Raising a new round is not just about getting a term sheet signed, it is also about finding the right investors for what we want to do and how we see the future. It needs to be a match for both parties, so we do our homework before we talk to possible investors.

As we are scaling a B2B SaaS platform we are especially looking for investors who have experience in this area and who can help us scale the platform to new markets.

Ulobby is expanding to the Swedish market now, right? Exciting! Can you tell us a little more about that?

Yes, that is exactly what we are doing. For the past couple of months we have been exploring the Swedish and Norwegian markets, as we are preparing to enter these countries during the next quarters. We have had very good initial feedback and actually got our first users in Sweden last month before even launching there, so we definitively believe there is a demand in the Nordics. So right now we are preparing the launch which includes a lot of ground work as well as exploration of potential partnerships to get more distribution as quickly as possible.

How many potential customers do you have in Sweden?

Well, if we look at the Swedish lobby/Public Affairs market compared to say the Danish, it is much bigger, estimated to at least 5-10x.

When we look at what is called “the Serviceable Available Market” for the countries we are focusing on, the spend is around €350 million yearly, growing around 10-15% a year. So what is the macro driver for this? Basically it correlates with the growing political uncertainty around Europe, which then results into increasing political risk for companies and organizations. The micro driver, inside these companies and organizations, is that due to this political uncertainty, they want to understand their political issues in more detail, and what is new is that they actually want to analyze and explore these patterns and data themselves on an ongoing basis instead of e.g. outsourcing this work to others and get it once or twice a year.

Is the product for the Swedish market different from the one in Denmark or Belgium?

Ulobby is currently present in Denmark and Brussels, and, of course, there are differences in these markets and the political parliaments are different, but at its core our platform is built on technology and tools which suits Public Affairs Professionals no matter where they are based in the world. We already have clients across many countries and continents, so, for example, the language barriers are no longer an issue.

In Europe we can basically enter new markets in a matter of weeks if we decide to push the button.

How do you see Ulobby developing throughout the next few years?

We want to keep growing, which is why we expect to be present in 4-5 more countries before the end of 2023. Put simply, we want to be number one platform for Public Affairs Professionals in Northern Europe within 3-4 years, and then expand to southern Europe from there. We already had a lot of requests from Germany and we currently actually have UK clients, so these markets could be next up.

Besides growing horizontally, we also want to expand vertically, meaning that we are working in stealth mode on some new features in the area of semantic analysis and Natural Language Processing (NLP), which could be applied in other sectors such as advertising, communications or marketing. Basically it will make it possible to predict behaviour and movements in the public debate which could provide companies and organisations with huge advantages. So, all in all, the best is yet come!

Thanks a lot, Anders. We at Øresund Startup News are looking forward to writing more about your progress in the future! 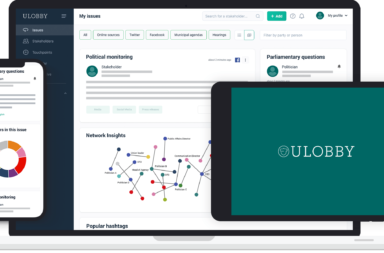