Startup Weekend Borgen reclaims the Danish parliament to the people 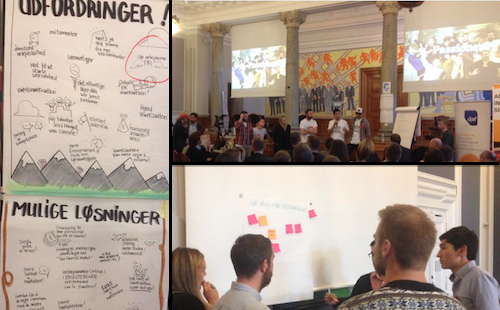 We have multiplied the number of entrepreneurs in Christiansborg with a very high number of times tonight! We might be about 7 that have actually started their own business in the Danish parliament.

Those were the words from Uffe Elbæk, a newly independent politician, who has been monumental in helping getting Startup Weekend Borgen inside Christiansborg and in this way for 54 hours reclaimed the Danish parliament back to the people.

“In many ways it’s a first for many of us.” Uffe continued

And he couldn’t be more right. It’s the first time that an event like this is held in the Danish parliament and for many of the participants it’s their first get-your-hands-dirty-with-blood-sweat-tears-and-coffee-introduction to entrepreneurship.

But what’s so special about that? Isn’t Startup Wekeends always full of first-timers? Indeed yes, but this time the organizing team behind has made a special effort in introducing the Startup Weekend event concept to a part of the population who rarely is subjected to entrepreneurship and the way entrepreneurship creates innovation. This Startup Weekend also introduced a daring concept, where one team got a special assingment using the following method:

This means that whereas the other participants have a well defined idea about what they were going to work on the dream team had no idea about what they were going work on. This takes a team that doesn’t have T-shaped skill-set, but more like a square-shaped skill-set. I myself was involved in picking it’s members, a great challenge. The team ended up consisting of 8 great persons: Pernille Ravn, Adrian Young-San Roessler, Neil Murray, Kræn Hansen, Daniel Mierzwinski, Stephane Chong, Simon Stubben and Øivind Slatto. Following a heated debate between the politicians – almost to the point of a fistfight – two challenges were picked: “Free the workers” and an oldie-but-goodie “put entrepreneurship back in the schools”. The team picked “Free the workers” – about how to make more corporate workers take the jump into intra/entrepreneurship. The solution they came up with was called Passioneur – which uses peoples passion to match people them together in order to find each-others and start businesses together. They really showed the importance of a good team – in about 24 hours they did everything from building the product, brand it, get public attention, get customers and get testimonials from prominent people. They did everything that’s required of you to do when building a startup. A really successful and highly skillful execution.

The other teams consisted of a great mixture of interested participants. Students, corporate employees and quite a few members of the DJØF organisation (a union association for economists and lawyers). There was also a greater then usual diversity in ages: all from 20 years to 45 years and older where part of the teams.
These teams where free to create whatever they wanted, just as in normal Startup Weekends. However, one of the prizes was focused on creating benefits to society.

The teams and the projects

14 teams were part of the Startup Weeekend in total:

What should probably be apparent by now is that these solutions are quite different from what can usually be seen at Startup Weekends (at least the ones this author have been a part of). First of all: Many were very focused on the Danish market. Secondly, many of them deal with social challenges; Passioneur, Livewalk, Flexiwalk, Lommepengekortet, Folkestemningen, De grønne piloter, Det virtuelle lærerværelse, Status DK and Diversify. I would say that only Kickstream, Meetio and The Polisher could definitely be found at other Startup Weekends as well.

During the pitches it became clear that for many of the presenters this was one of the first times they had ever pitched a product for a large audience. And in terms of pitch quality a few teams immediately stood out: Passioneur, Meetio, Flexiwalk and Kickstream. Unfortunately, in the short pitching time it was hard to judge how much work the teams have put into it. For instance it wasn’t very clear how much work the Passioneur team had put in achieving what they achieved. It was probably similar for most of the teams.

The Jury and the Winners

The jury was also an odd crowd with only one usual suspect: Tine Thygesen, CEO and co-founder of Everplaces plus co-founder of Founders House. The rest was from big corporate entities:

This in itself was interesting and made it a challenge for some of the more experienced teams because they were clearly used to a different mindset in the jury.

The jury was supposed to match the teams to three prizes:

The biggest business potential prize went to Flexiwalk. The primary reason that they managed to build a prototype of the wheelchair only since saturday night and the fact that they already sold to 3 customers.

The biggest use to the society prize went to Lommepengekortet. Very well deserved as it obviously tackled a big issue in the danish society (10% of young people are in the RKI) in a creative way.

The best tech startup prize went to Meetio, which despite the fact that they didn’t spend any time validating customers had a technological very impressive solution. The team was clearly very skilled and had a nice complementary skillset.

One important goal of the Startup Weekend Borgen was to capture the attention of the politicians. Whether this has succeeded remains to be seen. Uffe Elbæk certainly seems to represent a promising way in, as he seemed very dedicated to the purpose. This Startup Weekend Borgen definitely succeeded in reclaiming the Danish parliament as a place for the people.