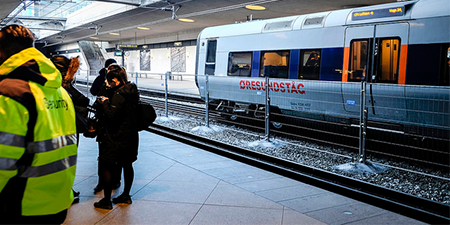 The night to Monday the 4’th, a new id-control was instated between Denmark and Sweden. This means that travelers now will have to show valid id every time they cross the border. The changed circumstances have led to prolonged travelling times, which have notably affected the people who work on the other side of the border.

Sven Paulin, the co-creator and head of marketing of Fieldly, daily takes the train from his home in Copenhagen to Fieldly’s main office in Helsingborg. Last Monday the id-control led to a doubling of Paulin’s travelling time. This day, it took him three hours to get to work.

“Normally I can ride all the way in the silent zone and in the same train. This time, I had to change three times. In the future, I will be able to shorten the time by matching the trains better, but of course, it affects us who work in the region. We will have to move, change jobs or companies will have to move.” Says Sven Paulin in an interview with Breakit

Sven Paulin is also concerned that the control will have dire consequences for the open mobility in the region.

“I thought ‘is this the end of the free and open mobility that has been so wonderful down here?’ A mobility that so many people value.” Says Sven Paulin

A third of the staff delayed

The online shop Boozt has been confronted with similar problems. Around a third of the employees, working at Boozts office in Malmø, travel from Denmark. The control has resulted in daily delays between 20 and 30 minutes.

“We hope that it will be short-lived because in the long run it will be difficult if a big part of the staff is half an hour late every day. But it’s difficult to say now how it’s going to be,” says Hermann Haraldsson, VP at Boozt.

The employees have been able to get work done in the train and the delays haven’t therefore yet been a significant problem.

The 1’st of April, Boozt will move their office from the main square in Malmø to Hyllie. This transition is mainly due to a need for additional office space but also serves to get closer to Denmark. Fieldly is similarly thinking of establishing an office in Copenhagen, thereby accelerating their expansion to Denmark.

Latest investments in the region (May 2018)

How is it going with LU Holding’s startups?